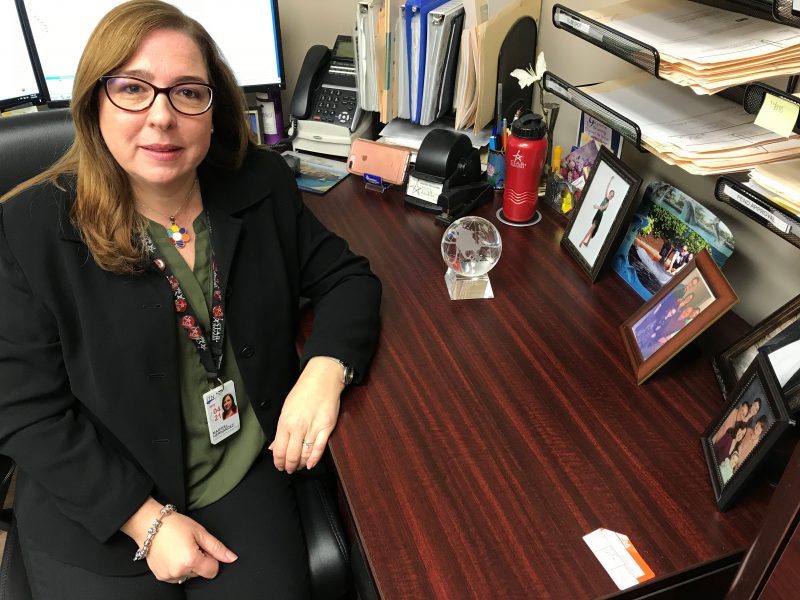 Loyalty can’t be bought, it has to be earned.

We’ve been grateful to have earned Maribel Hernandez’s devotion for the last 16 years. Hernandez is our ocean export supervisor and has been with iTN since 2002. A witness to many changes in our company, Hernandez serves as a personal timeline of where we once were and how far we’ve come.

Hernandez began her career in 1990 working at Freight Forwarder-International Shipping one of the export pioneers in Miami where she learned to process documentation, worked in customer service and did the handling of the shipments to Central and South America. As a young mother Hernandez said having her first daughter and wanting a better life for her new baby gave her the push to explore a career in logistics.

She recalls when the operations system was manual and the documents were sent via messenger to the shipping lines. Hernandez would also travel to places like Costa Rica and participated in the loading of a vessel for Seaboard Marine.

“It’s a unique experience where you can appreciate the handling of the load. After my time at International Shipping, I went to work at Carotrans, an NVOCC handling all the shipments generated by international agents for four years. Then in 2002 I was hired by iTN Worldwide to handle the contracts with the lines and filing with the FMC. At the same time, I was tasked with developing the market expanding the Caribbean lanes that we were known for. I think that over the years I have obtained experiences that today I put into practice and share with my colleagues who have less time in the industry. I like to serve as a guide and offer them solutions for their shipments.” Hernandez said.

Over the years iTN joined Amerijet Holdings and began to grow and receive cargo at their nationwide stations. Hernandez also consolidated shipments and managed the logistics side, coordinating inspections and documentation. In 2012 Amerijet and iTN Worldwide became sister companies giving shipments a further reach and shipping to all parts of the world. Hernandez handled special accounts and VIP clients.

Since her journey began at iTN Worldwide, Hernandez has reached many goals and accomplishments. Some of her accolades include winning the STAR Award program twice. The STAR awards recognize employees for outstanding performance with a $500 cash reward. She also became the first employee to be nominated 11 times in 12 months and has been nominated 51 times by more than 30 different people worldwide.

Hernandez says she’s grateful for her colleagues at iTN but remembers that her perspective of the company elevated when iTN supported her while her son battled Lymphoma cancer.

“I was working from the hospital and the house for four months. I would coordinate the loading of containers, provide customer service and print documents. I recognize iTN for supporting my work and keeping me on despite a time so hard and uncertain. My son is well and on his way to remission. Today he is in good health. I am very grateful to the company and my superiors for their encouragement during that difficult time.”

Maribel says the scare with her son has increased her faith and character. She also makes sure to take time to balance her busy work schedule with family time and cultivates a work-life balance because iTN encourages it.

“I am a lover of nature. My favorite flowers are orchids and I like butterflies. In my garden, I have plants to attract them and I’ve even seen the birth process of the monarchs. I also have a pond where I have water lilies and koi fish. I like to enjoy time with my family outdoors on the weekends. When I don’t have social events with friends and family, I’m busy with my youngest daughter who is a scout and ballet dancer and has a lot of events that we enjoy together.”

Hernandez said being a part of iTN Worldwide has given her a well-rounded perspective on being a professional while still dedicating time to personal matters. She said she’s also grateful for the way they’ve encouraged her to grow as a leader in her department and uses her skills to help her ocean team.

“Last year I was at the Super Vision program with the Amerijet University to support my role in becoming the ocean export supervisor. It sharpened my skills in being a role model to my colleagues. Refreshed rules and procedures as they should be carried out and taught me critical thinking skills that I put into action daily, especially when the team needs a solution. I am very proud to belong to the iTN family. I have good friends and colleagues here and I look forward to the next years of my time with this company.”